Randy Ramos is doing his part.

As a businessman and as part of the community, the CEO of Global Business Solutions is all-in on the idea that workforce development is everybody’s responsibility.

That’s why Ramos is part of the team that is coordinating CyberThon, which on Jan. 22-24 will bring some 60 students to a friendly competition style event that allows students to put their skills in information technology and cybersecurity to the test.

Attendance this year is triple what it was last year, Ramos says. 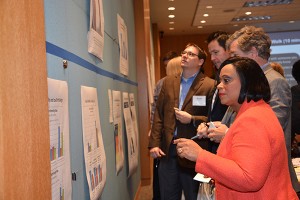 “People came out of the woodwork to support this,” he says. “Next year, (if it keeps on this pace), I don’t know what we’re going to do.”

Those are the kind of problems Ramos — and Pensacola at large — needs more of.

And that is part of the impetus behind a coalition of business and civic leaders that is forming around the idea of mobilizing public and private resources toward improving the community.

A company called Strive Together has been hired by four of the area’s biggest businesses — Navy Federal Credit Union, Gulf Power Co., Sacred Heart Health System and Baptist Health Care — to consult and advise a growing circle of community leaders on how to change Pensacola for the better.

Ramos, who was among the group at the early January meeting, said CyberThon reflects his interest in growing workforce development — and where he thinks he can contribute the most to an effort to improve the quality of life in the Pensacola area.

“We do have a crisis here in our (IT) employment arena,” Ramos says. “I see it and that’s where I can make the most impact. I can help these students acquire a credential toward employment.”

Much of the data at the first Strive meeting was correlated to the Studer Community Institute’s Pensacola Metro Dashboard. The Dashboard is a group of 16 metrics — developed over the last two and a half years with the University of West Florida — that measures the educational, economic and social well-being of the Pensacola area.

“The initiative in general is a long time coming,” Ramos says. “There are many of us, over the last two or three years, who have all felt this, sensed it, been trying to do something about it. It’s very positive for someone to take the initiative to bring everyone together.”

Strive began in Cincinnati and has spread to a network of 65 communities in 32 states nationwide. The group facilitates a community’s efforts to use data and common benchmarks along the continuum of “cradle to career” to focus on improving education outcomes. 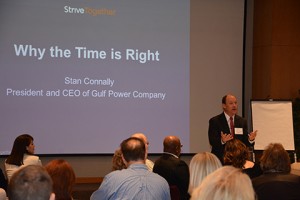 Stan Connally, Gulf Power’s CEO, said his company has a long history in education partnerships and a strong interest in economic development. The Strive partnership touches on both of those interests.

“This one to me is as fundamental to our community as most or a lot of the other things we get asked to be involved in,” Connally says. “To partner with other key business leaders on something like this frankly, internally felt natural, and it felt like good timing.

“Part of it is awareness,” he says. “(Studer Community Institute) has been putting together awareness pieces through the dashboard. There is a need to come together and have a greater conversation.”

Connnally and three fellow CEOs — Debbie Calder of Navy Federal, Susan Davis of Sacred Heart and Mark Faulkner of Baptist — began that conversation. They asked their teams to give them some ideas about the best way to have a communitywide conversation.

“They canvassed their networks and found STRIVE,” Connally says. “They have a disciplined process they endorse. They had to agree to work with us too. They wanted to know this community was invested, too. They were very impressed by the alignment they’re already seeing on this topic.”

Navy Federal’s Calder says the partnership is important for her company, not only from a community involvement standpoint, but also as a business decision.

“When we started having the conversation about growing to 10,000 employees, we started asking, ‘We’re getting great talent right now. Is that going to continue when we’re at 10,000 just by virtue of regular turnover?’ ” which is about 10 percent, Calder says. “Kindergartners who are going to school now could be working for us in 15 years or so.”

Navy Federal’s corporate level commitment to education has built this year into an effort that will see the credit union become business partners with all 55 Escambia County schools — from elementary to high schools.

“We have more than 1,000 employees already volunteering their time as part of the education partnership and 100 mentors paired with students,” she says. “For us this is part of the long-term strategy. I’d love to see other businesses, we need all the arrows moving in the same direction.”

The next meeting, set for April 11 at Sanders Beach Corrine Jones Community Center will include a wider circle of invited participants than the initial meeting. Calder and Connally both say they hope the circle of people included in the conversation continues to expand to make sure as many voices as possible are heard.

Connally stressed that for this effort to succeed, it will have to outlast him and his peers.

“This is a long-term journey,” he says. “Let’s don’t fool ourselves into thinking in terms of a short number of years. It’s going to need to outlast every person in that room.”

And for any collective community impact to last, Connally noted, the entire community must own its successes and challenges.