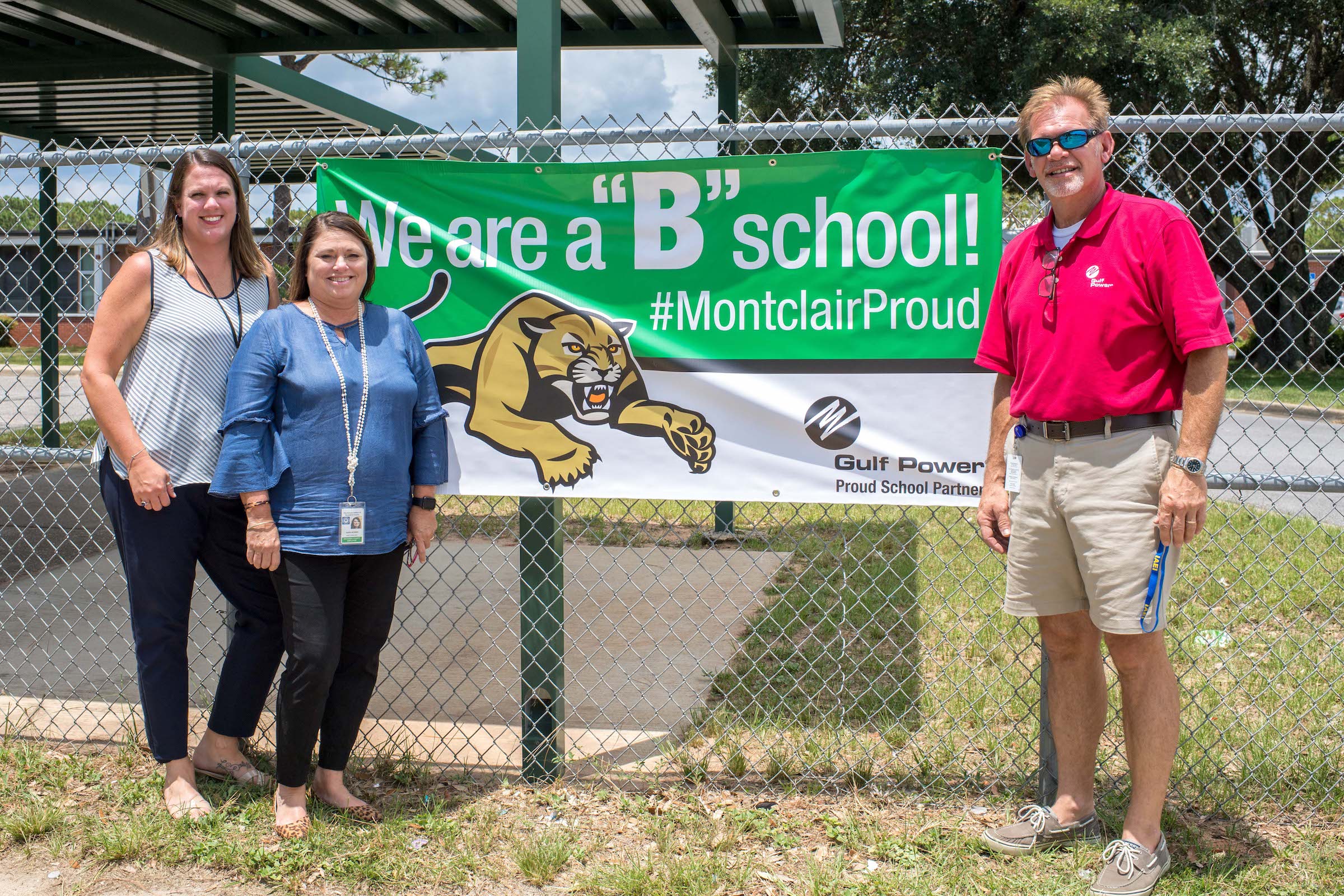 When Montclair Elementary School students returned to school today they were greeted by a banner emblazoned with “We are a “B” School #MontclairProud”, which Gulf Power donated letting them know their hard work last school year paid off.

The school, just five miles from Gulf Power’s corporate headquarters in Pensacola, is one of the most impoverished in the Escambia County School District. A majority of the students come from disadvantaged households with generational bouts of poverty, food shortages, drug abuse, emotional and physical abuse or low academic success rates, assistant principal Dawn Morris pointed out.

Against all odds, the school learned in July it earned a B for the 2018-2019 school year, representing an incremental rise from Fs in the 2014-15 and 2015-16 school years. School officials point to several factors contributing to this success, including dedicated and determined teachers and Gulf Power, which has been the school’s Partner in Education since the 2013-14 school year.

“There is no way we would have gone from an F to a B without the support of Gulf Power,” Morris said. “Gulf Power employees play an integral part in what we do every day.”

She had to catch her breath several times as she cited a long list of contributions Gulf Power and its employee volunteers have provided the school since joining forces. Contributions include providing family night meals, teacher lunches during preschool planning, educational materials and supplies and curriculum students use with tutors. They pay for the school’s Spirit Day T-shirts and field trip bus fees. Employees throw holiday parties, end-of-year pizza parties and cook up hamburgers for Parent-Teacher nights while others, including retirees, serve as reading buddies.

“Basically, they are the room mothers,” said Morris. “Our parents are doing the best they can with the resources that are available to them. The Gulf Power employees providing the party supplies, treats and games alleviates a financial burden on our parents. The volunteers also pay for T-shirts and buses for students to attend academic district competitions. Without Gulf Power’s support, our students would not attend the competitions.”

Eddie Dixon, a Gulf Power project manager who coordinates the company’s Partners in Education program, said employees who volunteer to adopt classrooms or serve as regular reading buddies provide a sense of stability in the student’s lives that many of them don’t have outside of their teachers.

“When you walk down the halls of the school and you see the students’ eyes light up and their arms reach out to you, it kind of tugs at your heartstrings,” Dixon said. “When I see the impact we’re making, it makes me want to go back year after year.”

Gulf Power joined the Escambia County School District Partners in Education program in 1986. After supporting Allie Yniestra Elementary until it closed in 2012 and then the new Global Learning Center, Gulf Power switched to Montclair when it became clear the struggling school had fewer volunteers and a greater need. Others have also played a role in the school’s success too, including Lakeview Baptist Church and several other churches.

“Gulf Power has been the longest-standing partner,” Morris said.

Over the years Gulf Power employees have logged thousands of volunteer hours at Montclair, 600 hours just in the past school year with about 30 employees supporting 15 of the 22 classrooms. With the new school season starting with a larger student population, Dixon is recruiting with a goal to adopt as many classrooms as possible.

“This is a commitment but a worthwhile one,” Dixon said. “When a student sees someone cares about them, it makes them feel like they matter. It builds their self-esteem and they want to do better.”

Sign up or learn more about the Partners in Education program.