Caleb Sampson checked off a goal to complete his Eagle Scout project, installing two osprey nesting platforms, before he graduated from high school, thanks to a Gulf Breeze line crew.

Caleb Sampson is among the 2020 high school seniors who are missing out on the traditional senior milestones with the COVID-19 health crisis keeping them home and away from gatherings.

Caleb decided instead of focusing on what he can’t do, “I’m focusing on what I can do,” he said. “That is completing my Eagle Scout service project. If I had been in school today, I would not have been able to see Gulf Power install the osprey nesting platforms. This shows that life is not canceled.”

A line crew from Gulf Breeze installed two donated poles for Caleb’s project in early March. He spent about a year working on his Eagle Scout project, which involved securing approvals from the City of Gulf Breeze Parks & Recreation Department and Tiger Point Golf Club to place his osprey nesting platforms at Shoreline Park and on the east golf course.

With the help of his Boy Scout Troop 417 at St. Ann Catholic Church in Gulf Breeze and Jim Cox, City of Gulf Breeze resident and osprey lover, he built the platforms to Florida Fish and Wildlife Conservation Commission specifications.

The final piece of the project was asking Gulf Power to provide the poles and install them to support the growing osprey population in the area.

“It’s great to be able to make a positive impact for the community and help a scout achieve his dreams of being an Eagle Scout,” said Aaron Mott, a line technician who helped install the poles. “Installing poles is all in a day’s work, but it’s not every day that you can have an impact and know you had a part of helping the osprey. It’s a special feeling.”

Caleb hopes his project will earn him the Eagle Scout designation when it goes up for review soon, a review that may be delayed by the current health crisis. He said he’s grateful to members of his troop and the Gulf Breeze community, including Gulf Power, who helped him materialize the project.

“I didn’t want to do the typical ‘build a bench project,” he said. “I wanted to do something that benefits the community and the osprey. The osprey return to the same nest each year to lay their eggs and raise their chicks. I’ll be checking on the nests to see if they use them.”

As if on cue, an osprey circled over the new nest at Shoreline Park as Caleb explained his project.

The project also helped Jim and his wife, Lila, complete a naturalist project.

“Last year Lila and I took a course titled ‘Coastal Systems’ as part of the Florida Master Naturalist Program with the University of Florida IFAS Program,” he said. “For the class, each student was required to do a final project. I chose to work with Caleb to put up the two osprey platforms in Gulf Breeze. There is a growing number of ospreys locally, but nesting sites have diminished because some of the trees they were using have deteriorated and fallen.”

Jim is hopeful these nesting platforms will be as popular with ospreys as two others in his former Pensacola Beach neighborhood that he also worked with a Scout to have built and installed.

“Those two platforms have had active nests each year for 10 years now,” he said.

He lauded Caleb’s ability to complete the project. “He did an excellent job,” Jim said. “In addition to building the platforms, he had to coordinate with the City of Gulf Breeze Parks & Recreation Department, Tiger Point Golf Club, and of course Gulf Power. No small task.”

Sandy Sims, director of External Relations, said Gulf Power supports many community events and projects, and occasionally supports projects like Caleb’s. “We have a limited amount of resources to support our communities and we especially enjoy partnering with Boy Scouts and other community partners on projects like this that are sustainable and improve our communities,” she said. “One of our regional external affairs managers can be contacted to see if a project can be considered.”

The company works hard to protect osprey while ensuring the reliability of the energy grid.

“As part of Gulf Power’s commitment to environmental stewardship, the utility has, since the 1980s, played an important role in supporting a strong return of the osprey in Northwest Florida by providing more than 200 nesting platforms for breeding pairs on top of our power poles across our service area,” said Jeff Cole, the company’s environmental stewardship coordinator. “Gulf Power has transferred many osprey nests from transmission towers that pose a risk to the birds and their chicks to these platforms, ensuring these iconic coastal birds continue to thrive.” 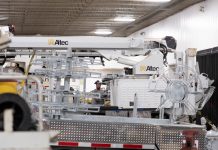