Gulf Power lineworkers were recently called upon to help Audubon Florida with an important environmental stewardship mission — checking on the welfare of shorebirds nesting in colonies on the graveled rooftops of grocery stores, schools and big-box stores.

After some training on the birds from Emily McKiddy, a biologist spearheading the Audubon Panhandle Rooftop Nesting Program, the lineworkers used their bucket trucks to help survey the roofs of six Northwest Florida locations in Panama City, Panama City Beach, Milton, Pace and Pensacola. They helped count nesting pairs of least terns and their nests, eggs or chicks.

“Audubon is trying to get a handle on whether or not these birds are nesting as successfully on rooftops as they would on their natural beach nesting grounds, and how many of them are taking to rooftops versus the beach, said Kimberly Blair, Gulf Power spokesperson.

“We don’t have enough data yet, but their habitat space on the beach is definitely decreasing with increases in population, development and tourism,” said McKiddy.

By the end of the two days of surveying, she and the lineworkers counted 110 nests.

“These are nests that we would have no idea they were up there without Gulf Power’s help,” McKiddy said. “It’s early in the breeding season, but we were able to count about eight chicks, and in the coming weeks that number will keep growing and growing. We are extremely grateful for all the help from Gulf Power.”

In recent years, Audubon has identified 50 rooftops that shorebird have nested on across Northwest Florida. So far this year, McKiddy and her team of Audubon volunteers have discovered 23 active nesting sites, but they expect to find more as the nesting season, which runs from late February to late summer, continues.

The gravel on the flat rooftops is what attracts the birds because it simulates the beaches shorebirds have always nested on, wide open spaces where they can spot predators approaching from long distances and where their sand-colored eggs and tiny chicks are easily camouflaged, McKiddy explained.

While these roofs offer some protection for beach predators, McKiddy and her volunteers spend the season monitoring these sites for chicks that fall off of the roofs or are picked off by hawks or other avian predators. They also install protective “chick” fences on some of the sites to improve the chances that chicks survive to fledge.

Jeff Cole, Gulf Power’s Stewardship coordinator, said the company has been expanding its partnership with Audubon Florida in the past year to help with bird conservation.

“The shorebird-trained lineworkers will now be on the lookout for shorebirds nesting on rooftops while they’re out doing their work,” Cole said. “When they see these birds they can let me know, and I’ll pass it on to Audubon. And, in general, volunteer stewardship projects like this helps our employees become more aware of the importance of conservation.”

Jason Burch, a Line technician who works out of the Milton, Florida office, said he enjoyed working with Audubon and learning about why there’s so much focus on protecting them.

“It was a great experience and different from what I do day-to-day,” he said. “I learned a lot about the birds. Living around here we’re pretty familiar with them, and I see signs posted about them nesting on the beach.”

McKiddy said she is hopeful she’ll be able to collect enough data with Gulf Power’s help to build a better picture of the plight of the state-protected birds.

“The overall goal is to help the species thrive and they can be delisted as protected,” McKiddy said.

Gulf Power has a long history of helping environmental and wildlife agencies with contributions, leveraged with Southern Company dollars, that are awarded as grants through the National Fish and Wildlife Foundation, Blair said.

“We’ve invested dollars in helping shorebirds,” she said. “So it makes sense we’d build on that investment by helping Audubon with their work on the ground to better ensure the success of their conservation programs.”

Learn more about Gulf Power’s stewardship efforts in “Our Promise.” 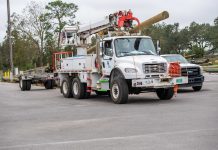 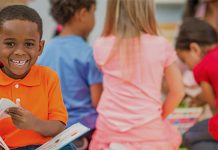 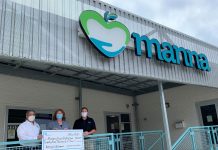 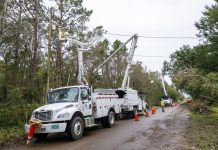 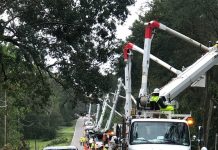 Gulf Power expects to restore power to 95% of Escambia County customers by midnight on Monday (Sept. 21)