Three thousand fourth through eighth grade students from Escambia and Santa Rosa Counties converged at Pensacola State College Feb. 23-24 for the Worlds of Possibilities Career Expo, with a goal to plot a course for their future. 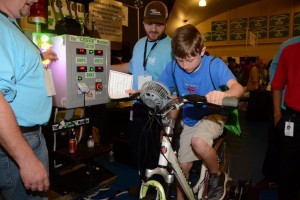 Gulf Power had one of the largest exhibits in the World of Energy section, with 50 employees demonstrating every segment of the company from power generation, transmission, distribution and renewables to energy efficiency.

Abby Routh, 11, from West Navarre Intermediate  School, was captivated by Gulf Power’s linemen display — viewing an amphibious vehicle that could traverse swamps to gain access to power lines and looking over all the gear the linemen use to scale poles.

“I always wondered how they do the lines and how the power runs through them,” she said. “I hope to be a teacher, but I may change my mind after seeing all of this.” 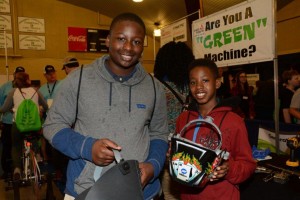 Joshua Davis, 12, of Warrington Middle School, was pondering his future propositions as he explored Gulf Power’s displays.  “I never thought about it before now, but I might consider Gulf Power for my career,” he said.

This year’s Expo was part of SkillsUSA Region 1 Competition, which attracted more than 350 high school and college students from Pensacola to Tallahassee who attended to compete in a variety of skilled events.

Gulf Power has been involved with SkillsUSA competitions and conferences for almost a decade.

PSC worked with Gulf Power’s Jennifer Grove, Community Development manager, to add the World of Possibilities Expo — patterned after one in Georgia — to the Pensacola Skills events in 2011.

Kristie Kelley, Workforce Development coordinator, organized the World of Energy portion of the Expo this year, which included other energy-associated companies and organizations such as the American Association of Blacks in Energy.

“When I asked the kids what they learned in the World of Energy when they were leaving the booth, their responses always amazed me,” she said. “One student said he didn’t know it took that much work to make electricity.”

Another student, who was walking into the exhibit, wanted to know if Gulf Power employees used fractions at work, Kelley said.

That’s what the Expo is about, she said, showing the students how what they do in class every day applies to the real-life situations Gulf Power uses daily.

Kelley said she could not have pulled off this year’s Expo without so many eager and willing employees volunteering.

“They truly wanted to be there and spread the word about Gulf Power,” she said.

She pointed to the Protection & Control team who created a model of a transmission line, complete with a protective relay, for this year’s event.

“It’s a model that shows how we operate and protect the lines,” said Robert McLendon, Principal engineer. “The protective relay controls the circuit breaker that operates the line and can detect problems on the transmission line.”

Students created a short circuit by touching the line with a copper wire. McLendon and his team, including Steve Carter, Protection & Control manager, who helped build the model, spent a lot of time explaining to the steady stream of students how the relay works.

Many of the kids were fascinated with the model, though McLendon admits mostly for the “sparking” affects.

“Chris Quesada, Protection & Control Test engineer, and I were talking to this one kid who was really asking intelligent questions,” he said. “We sparked his interest. I asked him if he was interested in being an engineer. He said, ‘yes.’” 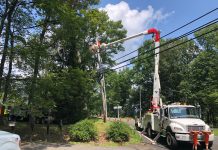