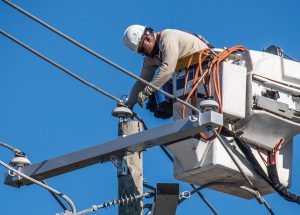 s caused by severe weather conditions or other

“This recognition is for the team, who all contributed in one way or another to the restoration efforts,” said Shelley Scarborough, area distribution manager for the Panama City region. “They worked 24/7 to make sure our customers got their power back on safely and as quickly as possible.”

Hurricane Michael, the strongest storm to make landfall during the 2018 hurricane season, was a Category 4 hurricane with peak winds of 155 mph. The storm hit Mexico Beach, on Oct. 10, knocking out power to about 120,000 customers in Gulf Power’s service area. Because of their tireless work, Gulf Power’s crews restored service to 95 percent of its customers within 13 days after the storm.

Marlene Santos, who came from Florida Power & Light Company to become the new president of Gulf Power, joined the company on Jan. 1 when Gulf Power became a subsidiary of NextEra Energy.

“I’m so proud of the Gulf Power team and their strong commitment to our customers,” said Santos. “Gulf Power customers can continue to expect this same kind of commitment moving forward.”

The winners are chosen by a panel of judges following an international nomination process. Gulf Power received the award during EEI’s Winter Board and Chief Executives Meeting in Palm Beach.

“The dedication of Gulf Power’s efforts to restore service throughout Florida after Hurricane Michael illustrates our industry’s commitment to customers,” said EEI President Tom Kuhn. “Gulf Power’s crews worked tirelessly in hazardous conditions to quickly and safely restore power. They are truly deserving of this award.”