“We work hard every day to provide our customers with valuable and diverse energy solutions, and it’s a special occasion to see the vision we had for this project come to life today,” said Stan Connally, Gulf Power Chairman, President and CEO. “Adding clean, affordable energy to our energy grid through the innovative public-private partnership that enabled the completion of all three of the portfolio’s solar facilities is a proud accomplishment for Gulf Power, and a significant milestone for the local economy, our customers and the environment.”

The large-scale solar complex is just one of three military installations constructed by Gulf Power and developer Coronal Energy, powered by Panasonic. The projects will support the Department of Defense’s commitment to renewable energy and help further diversify Gulf Power’s energy portfolio and support the mission to provide safe, affordable, reliable and environmentally responsible energy for its customers in Northwest Florida.

“Considering the scale of the Gulf Coast Solar Center portfolio, collaboration between our team and the like-minded teams at the U.S. Air Force, U.S. Navy, and Gulf Power has been an essential element of our success in developing these projects,” said Jonathan Jaffrey, chairman and CEO of Coronal Energy™. “The result is a landmark energy project that represents what is possible when our nation’s military and its leading energy companies like Gulf Power commit to renewables. We are honored to take our place alongside these partners for this historic project.”

Combined, the facilities have the potential to reduce carbon dioxide emissions by  139,000 tons annually. This figure equates to removing nearly 670,700 cars from the road for one year.

“The Navy continually explores commercially viable means of incorporating renewable energy into our base operations and communities, both on land and at sea,” said NAS Pensacola Commanding Officer Capt. Christopher Martin. “The initiative we’re celebrating today, in which Naval Air Stations Pensacola and Whiting Field converted two dormant landing fields into fully operational and grid-connected solar facilities, showcases one path we’ve chosen. By strategically repurposing these assets, we’ve added resilience to our bases and created economic opportunity for the United States military and all of the project partners.”

Brigadier General Evan Dertien, 96th Test Wing, Air Force Materiel Command, Eglin Air Force Base said, “The initiatives at Eglin, along with those at Saufley and Holley, support the Department of Defense’s commitment to renewable energy and are an impressive display of joint leadership that results in the effective pursuit of energy independence. We’re also empowered by the fact that the revenue received for leasing the projects on Eglin lands will afford us the opportunity to invest in Eglin’s on-base energy initiatives, all while offering long-term local benefits that can serve as a positive example to military communities across the country.”

The combined solar facilities contribute to the growth rate for renewable energy jobs in Northwest Florida. Since construction began at all three locations in November 2016, nearly 450 local laborers have been deployed.

The facilities are estimated to generate the following amounts of electricity: 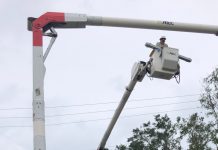 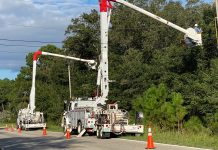 Gulf Power restores more than 40% of customers impacted within the first day of Hurricane Sally’s exit from its service area; heavy traffic and... 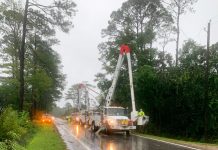 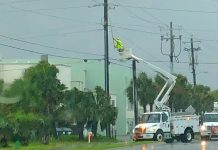 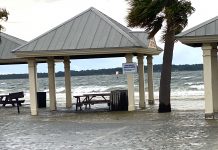