New Gulf Power-supported Longleaf Stewardship grants will give a much-needed boost to aid the recovery and restoration of the state’s native longleaf pines and help protect wildlife.

At one time, the majestic longleaf pine ecosystem covered more than 90 million acres across the Southeast, from Virginia to Texas. The ecosystem, which is host to one of the most diverse habitats on earth had dwindled to 3 percent of its original acreage because of European settlement, widespread timber harvesting, commercialization and agriculture.

Gulf Power’s parent company, Southern Company, joined the National Fish and Wildlife Foundation on June 30 to announce $4.6 million in grants supporting wildlife protection and natural resource conservation, and to establish and enhance more than 173,000 acres of longleaf pine. Eleven projects are being supported across Alabama, Florida, Georgia and Mississippi, and are expected to impact more than 132,000 acres.

“Gulf Power has a long history of working to create a positive impact on our environment and enhance Northwest Florida’s natural resources,” said Rick DelaHaya, Gulf Power spokesperson. “It’s a strategic investment and a commitment we share with our Southern Company partners as we work toward restoring the legacy of the longleaf pine and the native wildlife it supports.”

Three of the 11 projects are within the Gulf Power service territory and will help restore the longleaf pine ecosystem and improve wildlife habitats, which sustains some 600 species of plants and wildlife.

Monitoring and gathering data on the Red-Cockaded Woodpecker 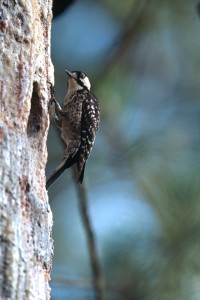 One project will take place in the Apalachicola National Forest, where the Longleaf Alliance will monitor close to 110 groups of the endangered red-cockaded woodpeckers for breeding activity, band nestlings of successful breeding pairs, and translocate nearly 30 subadults from a pool of successful fledglings.

One of the longest funded programs supported by Gulf Power through the Power of Flight projects, biologists have been able to relocate unrelated pairs from recovered populations and move them to longleaf habitats across the Southeast.

The project will also record critical status data on the 275 of the nearly 559 active red-cockaded woodpecker clusters in the Apalachicola National Forest, providing a significant contribution to the world’s largest RCW population.

Robert Abernethy, president of the Longleaf Alliance, thanked Southern Company and Gulf Power for the continued support and funding over the past years through the Longleaf Stewardship Fund for the ability to continue working in the field to help improve the critical habitats.

“It was the forethought of Southern Company and Gulf Power in establishing the Longleaf Legacy program so many years ago that helped fund all the work that has been done,” he said. “The Longleaf Alliance is proud to work with Southern Company and Gulf Power through the current Longleaf Stewardship Fund administered by NFWF and the Power of Flight program to help restore the South’s iconic longleaf forest.”

The Longleaf Legacy in the Apalachicola River region

The second program will build on previous efforts to preserve and restore the native biodiversity of the Apalachicola River region. The Apalachicola Regional Stewardship Alliance will focus its efforts on longleaf restoration and outreach tools. Funding from the grant will help plant 1,300 acres of longleaf pine and enhance an additional 20,800 acres of existing longleaf habitat. Partners will continue to fund long-term projects that balance restoration scale and complexity, such as the complete sandhill reconstruction at Torreya State Park, and bring new properties in strategic geographies into the beginning stages of longleaf conversion.

The project will also pursue innovative communication approaches to further educate the local community on longleaf pine. According to Brian Pelc, restoration project manager for the Apalachicola Regional Stewardship Alliance, the funds will allow the Alliance to continue enhancing local natural resources in the Florida Panhandle.

“Longleaf pine forest restoration at sites like the Apalachicola Bluffs, Ravines Preserve and Torreya State Park near Bristol will result in better habitat for wildlife and improve opportunities for the public to get into nature,” he said. 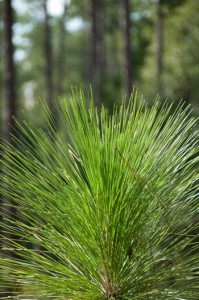 The third project in Gulf Power’s service territory takes place in the Blackwater River State Forest. Restoration efforts there continues as the Gulf Coastal Plain Ecosystem Partnership completes 24,000 acres of prescribed fire, 250 acres of invasive species control and 575 acres of mechanical treatments. The project will establish more than 730 acres of longleaf pine, including on an important parcel linking the state forest to Eglin Air Force Base. Partners will also use ecological monitoring, surveying and mapping to continue to improve longleaf restoration through adaptive management. Habitat improvements will benefit both the reticulated salamander and the red-cockaded woodpecker.

A partnership formed in 1996 to conserve and restore the dwindling longleaf and pine ecosystem, 12 public and private landowners have worked together through GCPEP to maintain and restore more than one million acres of longleaf forest. Gulf Power is a member of the partnership and adds 4,828 acres of land to the restoration efforts.

According to Vernon Compton, project director for GCPEP, the Longleaf Stewardship Fund awards have played an important role in the recovery of the longleaf pine, and will advance priority conservation work in Northwest Florida and southern Alabama.

“The longleaf ecosystem is home to abundant wildlife and plant species, and the 12 partners who collaborate in GCPEP will be able to continue efforts through this grant to restore this unique system,” said Compton. “Success in restoring longleaf pine depends upon both public and private landowners, landowners like GCPEP partner Gulf Power who is restoring and managing longleaf pine on 4,828 acres in Northwest Florida. Working together the partners are able to accomplish much more conservation work on the ground leading to a healthier and more resilient longleaf ecosystem.”

The Longleaf Stewardship Fund builds on the success of the Longleaf Legacy program, a partnership between Southern Company and NFWF that from 2004–2011 invested $8.7 million in projects to restore 82,000 acres of longleaf pine forest and the native species that rely on it. Additionally, another 20,000 acres were restored through the company’s closely aligned Power of Flight program with NFWF.

Since 2004, Gulf Power has participated with Southern Company affiliates and the National Fish and Wildlife Foundation in the landmark public-private partnership.

“Gulf Power is a proud steward of the environment and committed to preserving the eco-system of Northwest Florida,” added DelaHaya. “The awarding of these grants will help ensure the continuation of the public-private partnerships in restoring and conserving some of the country’s most precious natural resources.”