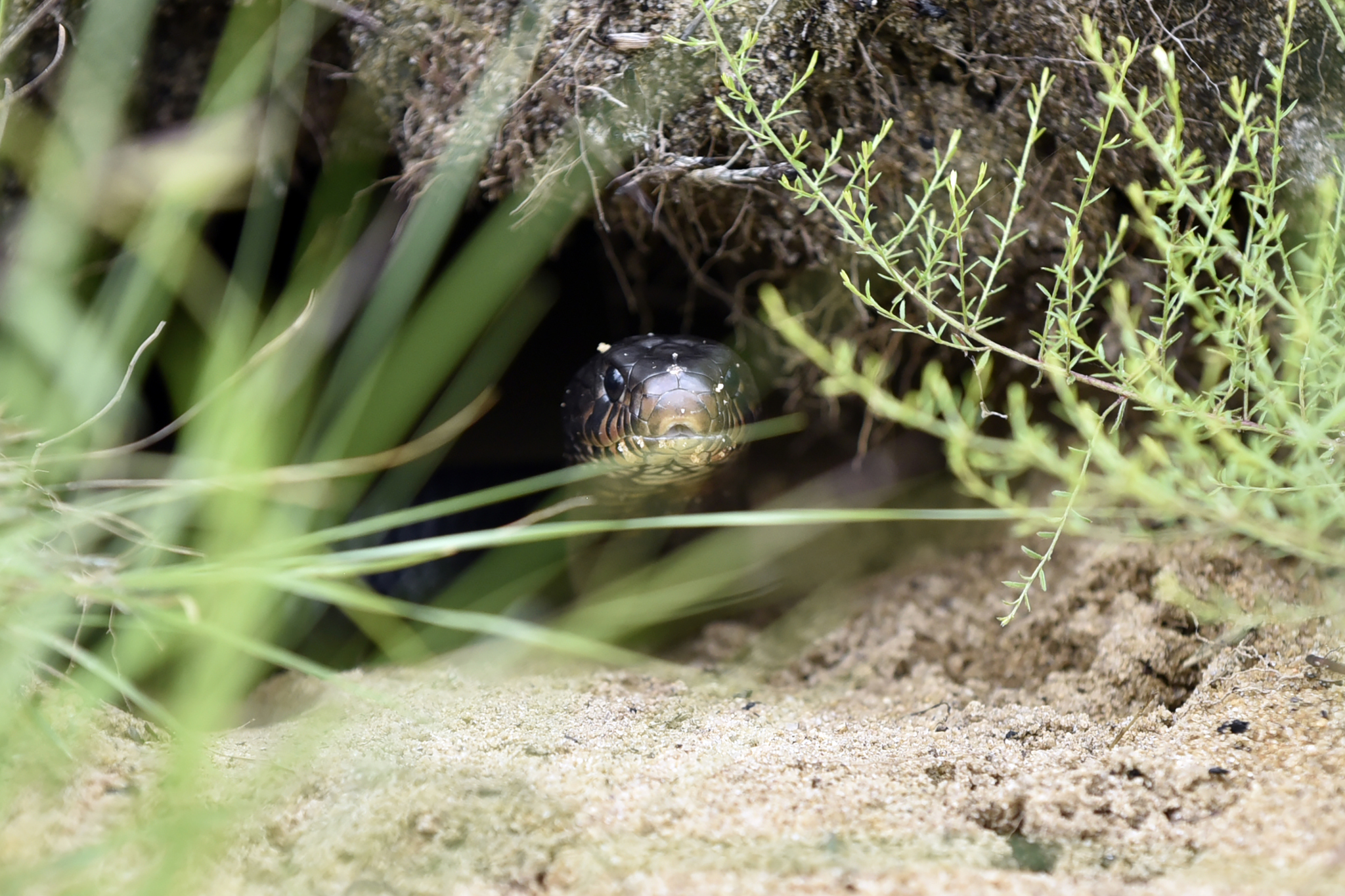 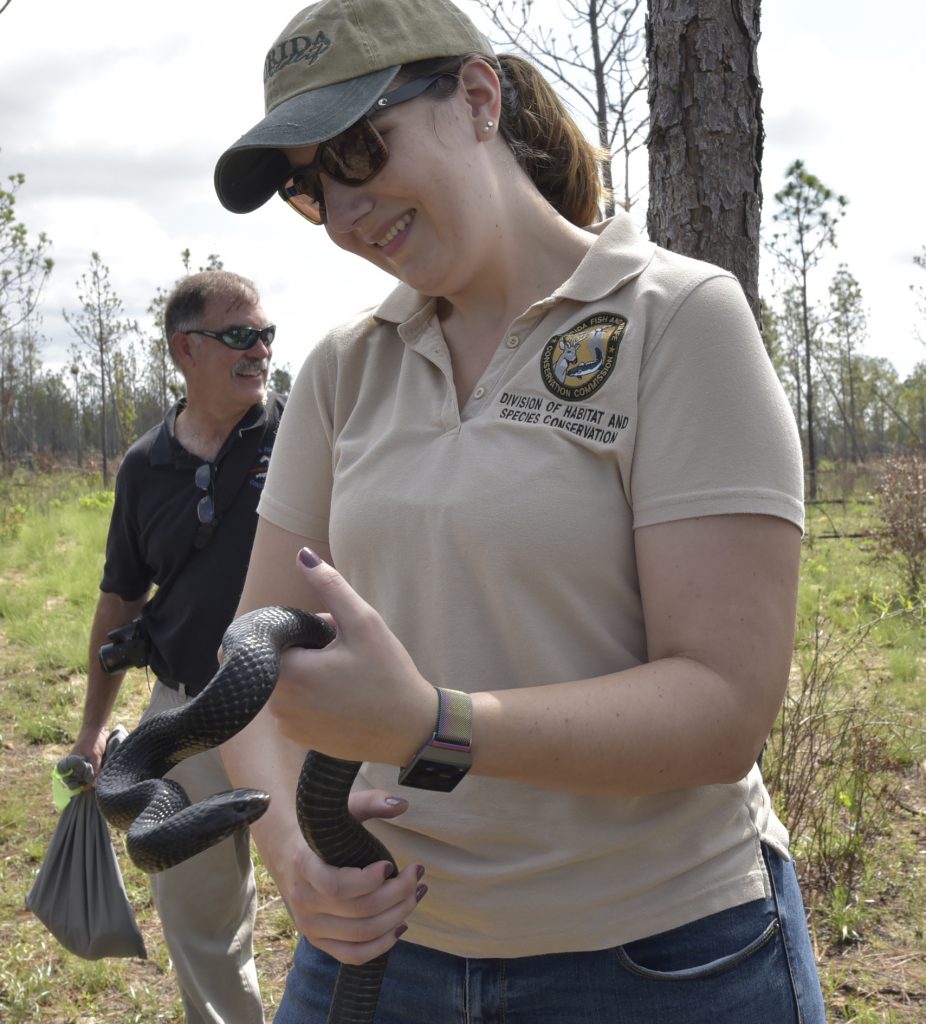 The beautiful indigo-colored snakes, listed as threatened under the Endangered Species Act, were released this week as part of a continuing collaborative plan to return the important, native, non-venomous apex predator to the region.  While docile to humans, indigo snakes rule the reptile world in their native longleaf pine forests.

This effort marks the third year in a row that snakes raised specifically for the recovery of the species have been released at The Nature Conservancy’s Apalachicola Bluffs and Ravines Preserve (ABRP) in Bristol.

“With three years of releases under our belt, we are now looking forward to seeing evidence of reproduction on the Preserve. I can hardly wait!” said David Printiss, North Florida Program Manager, The Nature Conservancy in Florida.

The eastern indigo species recovery effort in North Florida is the long-term joint commitment of multiple nonprofit, agency, and academic partners: The Nature Conservancy, the Central Florida Zoo & Botanical Gardens’ Orianne Center for Indigo Conservation (OCIC), Auburn University, the Florida Fish and Wildlife Conservation Commission (FWC), U.S. Fish and Wildlife Service (the Service), Welaka National Fish Hatchery, The Orianne Society, Joseph W. Jones Ecological Research Center, Gulf Power, Southern Company through the National Fish and Wildlife Foundation (NFWF), and the Fish & Wildlife Foundation of Florida. The partners have worked together for decades to restore and manage the habitat required by the snake, and many other species, to make the release possible. 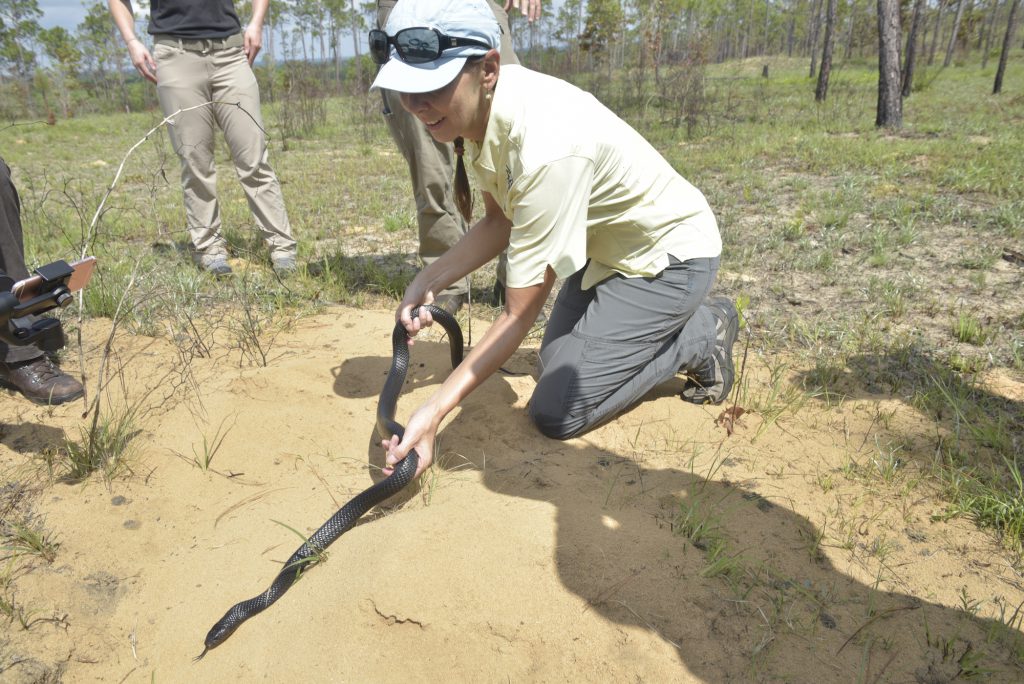 Gulf Power was one of the first partners to join the effort to accelerate the longleaf pine reforestation and ground cover restoration with $385,000 in grants from 1999 to 2005. Gulf Power supported grants that supported the program through the National Fish and Wildlife Foundation through 2018.

View video of the release

The eastern indigo snake is the longest snake native to North America and an iconic and essential component of the now rare southern longleaf pine forest. It serves a critical function to balance the wildlife community — it consumes a variety of small animals including both venomous and non-venomous snakes. At over 8-feet long, the impressive indigo often relies upon gopher tortoise burrows for shelter. The snakes were historically found throughout southern Georgia, Alabama, eastern Mississippi, and throughout Florida, though their range is now far more restricted.

Largely eliminated from northern Florida due to habitat loss and fragmentation, the indigo was last observed at ABRP in 1982, until 2017 and 2018 when several dozen snakes were introduced to the preserve. This year’s annual release is part of a 10-year commitment to the species’ recovery and continues a focus on the establishment of healthy ecosystems through collaborative land, water and wildlife conservation efforts.

“We continue our work throughout the state and at our preserves to create healthy habitats and properly functioning natural systems that support iconic and important wildlife and plants,” said Temperince Morgan, Executive Director, The Nature Conservancy in Florida. “With the third annual snake release and the teamwork of our dedicated partners, we’re moving the indigos in the direction of species recovery.” 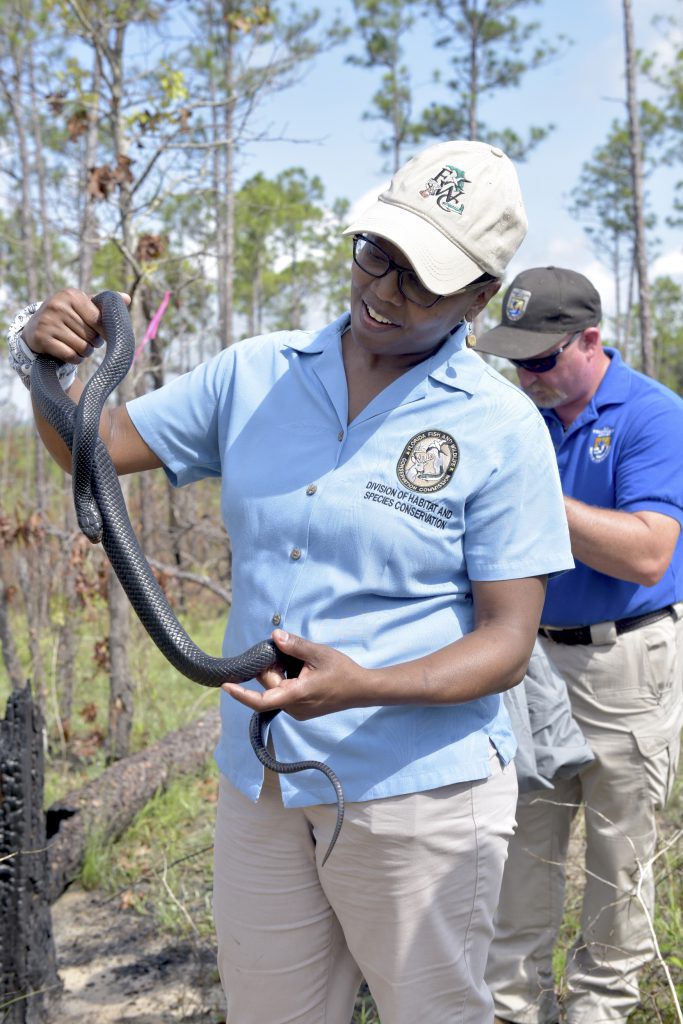 ABRP is the only site in Florida currently designated for indigo reintroduction. The 6,295-acre nature preserve in northern Florida’s Liberty County protects a large longleaf pine landscape carved by numerous seepage streams and is home to the gopher tortoise and the full suite of longleaf pine specialists. Located in the Apalachicola Bay region along the Apalachicola River, the preserve lies in the center of one of five biological hotspots in North America and is home to a disproportionate number of imperiled species. The preserve is a living laboratory for the development of restoration techniques and land management excellence, dedicated to natural community restoration, preservation of biodiversity, and education and training.

Only five percent of the longleaf pine ecosystem remains globally. Over the past thirty-plus years, The Nature Conservancy has employed science and technical expertise to develop the state-of-the-art groundcover restoration process that is now used by state, federal and private partners across the southeast to restore longleaf pine habitat. This restoration, combined with the Conservancy’s robust prescribed fire program, has resulted in improved longleaf habitat on over 100,000 public and private north Florida acres in recent years.

Longleaf pine restoration is also a top priority at places like the Apalachicola National Forest and Torreya State Park—both neighbors to ABRP and supported by the U.S. Forest Service (USFS) and Florida Department of Environmental Protection (FDEP).

The 15 snakes released at ABRP were bred and hatched by the Central Florida Zoo’s Orianne Center for Indigo Conservation (OCIC), the world’s foremost comprehensive-based conservation organization dedicated to the captive propagation and reintroduction of the eastern indigo snake. All hatched in 2017, the 10 females and five males were raised for one year at the OCIC before transferring to the Welaka National Fish Hatchery for an additional year in preparation for their release. The snakes have been implanted with passive integrated transponders (PIT) by the Central Florida Zoo’s veterinary staff to allow for identification when encountered after release.

The initial 32 snakes released were implanted with radio transmitters by veterinary staff at the Central Florida Zoo which allow researchers to track the animals’ movements, habitat selection and behavior. One of the eastern indigo snakes that was released in 2017 traveled over a mile from where it was initially released, and two previously released snakes were observed together in the same burrow earlier this year.

The indigo reintroduction efforts are supported by grants and other funding, including a Conserve Wildlife Tag Grant from the Fish & Wildlife Foundation of Florida, funded through the purchase of Conserve Wildlife Florida license plates and designated for the conservation of non-game species and the habitats that support them.

“We are happy to be continuing this project with so many of our valued conservation partners this year,” said Kipp Frohlich, the FWC’s Director of Habitat and Species Conservation. “This release is another important step towards re-establishing a thriving population of this unique imperiled species in the longleaf pine forests of the Florida panhandle.”